This guy is craaazy. Apparently he learned his style by copying what he thought were pen and ink drawings. They turned out to be wood engravings. This is the result.
A bit about him: Booth was born in Indiana and grew up on a farm in the middle of nowhere. Back then, major publications like Scribner’s and Harper’s relied on both illustrators and engravers to provide images; the illustrators’ drawings were engraved for printing. These illustrations were what Booth learned from. He eventually ended up working for the magazines he copied from.
Check out his line work. It's pretty much all about line placement. If you zoom in on the images you can really see how he used different densities of lines rather than line weight or crosshatching to separate different elements.
Personally, I really like the design of his clouds and trees. He's great if you like vertical compositions; it seems like most of his work was in that format.

I haven't bought it yet but I plan on it. 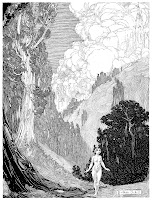 So what's this all about.

This is where I dump notes, thoughts, images, and all of that fun stuff. About art. It's a way to help me learn while sharing.